Brindle and I scouted the next farm where we found the same as the last one.  Eronel was not leaving any behind her for some reason.  What had Broadmire done to incur so much of her wrath?  And the farms that had been burned, the families butchered were half a day’s ride from the village proper.  It’s not like they were reappraisals.  Here was saw a shift in her tactics.

I called a council and pulled out the maps I had recovered from Eronel’s rooms.  Why she burned the diary, but not the maps eluded me.  Perhaps they held no power.  Regardless, I spent an hour adding marks from the Tranquil valley, listing out the villages we had been to, and letting the others fill in the gaps as they knew them.

Beyond Broadmire were several more villages: High Field, Rocky Cairn, and Forest Edge.  Danby told me as a child he’d been as far as Rocky Cairn with his father, trading good winter wheat for worked steel.   Not swords, but plow shears, hinges, and other items only a working smithy could provide.  River Crossing had a farrier, but the only blacksmith had been murdered more than forty years previously and they had been forbidden from hiring or training another.

The further away from the raider’s old fortress, he reported, the less compliant the villages got.  He had heard rumor that Forest Edge had never paid tribute, and that the effort had been too great for Eronel to mount a raid.  Made sense to me.  Cowing people with fear took a lot of energy.

Liz, Lilith and I talked a bit away from the others.   If the village ahead had been slaughtered, things were going to get a lot uglier.  We couldn’t hang around and bury all those people if we were ever going to catch up to Eronel.  I had a good idea she was heading to the lizard folk temple in any case, but if the folks at Forest Edge were willing to put up a fight, then her and her rag-tag army of ruffians may well avoid them.

We talked about what we were going to do once we caught the witch.  The valley was devoid of any real predators.  There were no orcs or hobs, no trolls, goblins or even giant spiders.  This valley had truly been isolated before the great cataclysm and the people lead a tranquil life.  Well, besides the witch  That was a different form of torment.

We avoided the rest of the farms, moving past them at a steady pace.  With each one we sent out a scout, but not once did we find survivors.  The mood of our caravan had gone from shock and horror to frustration and anger.  People began to bicker at one another, little things that would have been overlooked just two days ago, were like a burr under a saddle.  Fear can be an ugly thing and these people had anger and paranoia down to a honed edge.

We stopped two leagues from the village.  I told everyone to make camp, even though we were close to the village and we had several hours of sun left.  Frankly, I didn’t want to be surprised by what we found.  I discussed it and took a hand-picked group of volunteers with me to scout the village.  Danby stayed behind to help defend the caravan just in case, as did Lilith, surprisingly.  She said she had promised to work with Ingrid on her fighting skills.  Seemed like a good idea.  I suggested she add Jayden to the mix and anyone else who wanted to learn about close-in fighting.  She cast me a side-eye and said she’d do what needed doing.

Liz scouted ahead with Chloe.  The girl had the makings of a good tracker.  She listened to Liz well enough, and had good eyes.  The other three, farmer’s sons with stout arms and broad chests, rode in silence, deferring to their squad leader, Pavil.  She had garnered her squad’s respect quickly and efficiently.  These three followed her orders without hesitation.  But they were quiet.  I don’t know what horrors these few had seen, but based on my experience with others, I could assume the worse.

Brindle tagged along with me and I was coming to enjoy the dog.  He was very bright.  I had begun to believe that he could understand what I told him nearly as well as Brother Charles had in his day.  I missed that great blue bird, but Brindle was good company.

We didn’t hurry.  I wanted to get a good look at the lay of the land, and Liz wanted to give Chloe some time tracking.  We let the horses go along at a sedate pace, and closed the two leagues in just under two hours.  We would have about an hour in the village if we wanted to make it back to the camp at the same pace as we came out this far.  More time if we wanted to return after dark, or push the horses a little.  I was leaving our options open.

Seven buildings remained standing, including the great hall, which had been made off both wood and river stones.  The roof had collapsed, but the walls remained standing.  We headed to the well to water the horses and see if we could find any survivors.

Shouldn’t have bothered.  What we found was similar to the village of Black Oak, where we had first encountered the raiders.  Here in Broadmire a dozen individuals had been crucified on great crossed beams.  If they were not dead by the time Eronel left the village, the ghouls had seen to them.

Yes, you read that correctly.  Ghouls.  Fouls undead that preyed on the living and consumed the dead.  And that is what they had been doing when we rode into town.  The town hall had been stuffed with the villagers, the doors barred and the place set on fire.  Those inside had been roasted alive.  Turns out that’s just fine for the ghouls who had broken open the doors and were feasting on the dead.

Of course, to a ghoul, killing the living was much preferable. 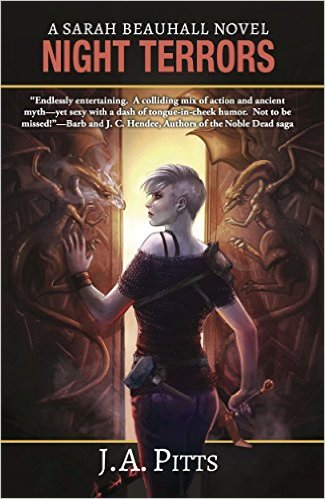